This Is Elder Abuse: Types, Warning Signs, and How to Report It

Have any types of elder abuse ever affected you or anyone you know? Have you ever suspected that you or a vulnerable senior in your life might be suffering from neglect or mistreatment? Do you feel conflicted, afraid, embarrassed, or unsure of what to do about it? Each day, millions of older people in America and around the world are negatively impacted by elder abuse. It's an ugly problem that needs to be better understood and taken more seriously by everyone, in every community. Nobody deserves to be neglected, exploited, or abused.

Unfortunately, the warning signs of abuse are often missed, ignored, or rationalized away—even by well-meaning people. In fact, it's likely that most cases of elder mistreatment go unreported, which means that Adult Protective Services, law enforcement agencies, and other relevant authorities often don't get the chance to intervene on behalf of seniors who need help. As a result, countless older adults experience a poorer quality of life and worse health outcomes than they otherwise would. (For victims of elder abuse, the risk of death is estimated to be three times higher than for seniors who haven't been abused, according to the National Center on Elder Abuse.)

By learning more about this subject, you can better protect yourself or those you care about. Plus, our communities need more advocates for the elderly. People like you can be lights who shine hope in the darkness and help create positive change. This article will teach you what constitutes abuse and neglect, who and what to pay attention to, how to report elder abuse, and how to potentially prevent it from happening.

What Is Elder Abuse? How Prevalent Is It?

Currently, there isn't one universally accepted definition of elder abuse. Legal definitions vary from state to state, and different researchers, government agencies, and non-profit organizations often have their own sets of criteria for defining elderly abuse. However, many basic definitions are similar to this one:

Crimes like burglary, street robbery, and assault by strangers are generally not considered elder abuse. But physical assault by a family member, neighbor, or caregiver definitely is considered elder abuse if it happens to a senior. Neglect is also frequently considered a form of elder abuse, as is sexual assault, psychological mistreatment, and financial exploitation when there is an expectation of trust between the victim and perpetrator.

How many seniors experience elder abuse? Nobody really knows. Estimates vary substantially since certain actions may be considered elder abuse according to some definitions but not according to others. Plus, the defined age for elder abuse victims varies: Some agencies and researchers say that anyone 55 or older can experience elder abuse, whereas others peg the age at 60, 65, or 70 and older. In addition, it's believed that for every case of elder abuse that gets reported, several more are never brought to light.

Even so, an article in The Lancet Global Health estimates that about 1 in every 10 older Americans experience elder abuse. Worldwide, the rate is estimated to be about 1 in every 6 older people. Among seniors who are ill or disabled, the rate is even higher. For example, the National Center on Elder Abuse (NCEA) says that depending on the particular study, between 27.5 percent and 55 percent of seniors who have dementia are estimated to suffer from elder neglect or abuse.

The consequences of elder abuse can be costly and far-reaching. In America alone, elder abuse causes so many injuries that it may be directly responsible for more than $5 billion in medical costs each year.

How Many Types of Elder Abuse Are There?

Elder abuse can take several different forms. And some seniors experience multiple kinds of abuse at the same time. Here are 7 types of elder abuse that are among the most commonly reported:

Self-neglect is also a form of elder mistreatment. However, in the case of self-neglect, there is no outside perpetrator; affected seniors cause harm to themselves. They may ignore their own basic needs or even refuse essential care, which can lead to new or worsening illnesses or injuries. In some cases, self-neglect is ultimately fatal. But it isn't always caused by mental or physical decline. Many seniors are poor or socially isolated, don't have the resources to meet all of their basic needs, and don't know where to find help, which means they have to make tough choices. For instance, they may go without heat in order to pay for food and medication. Or they may deny themselves essential medications in order to stay warm.

Some people also categorize healthcare fraud as a type of elder abuse or financial exploitation. Like other types of mistreatment, healthcare fraud can take many forms. For example, dishonest medical professionals may take advantage of elderly patients by providing insufficient care yet billing Medicare or Medicaid as if those patients were given full and proper care. Or unscrupulous pharmacists may under-fill prescriptions while charging full price for them.

What Are the Signs of Elder Abuse or Neglect? 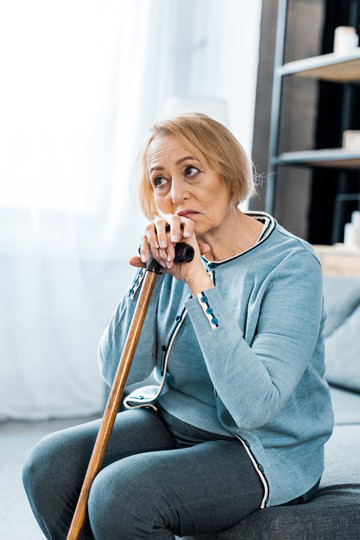 Sometimes it's obvious that elder abuse is taking place. However, in many cases, it isn't so easy to recognize abuse or neglect by others. Signs and symptoms can often mirror or get obscured by existing medical conditions, or they can be hidden by the efforts of devious perpetrators. But it's important to follow your intuition, take clues seriously, and make note of any troubling patterns you observe. Generally speaking, the signs of abuse or neglect in the elderly are associated with particular types of mistreatment. For example, consider the following warning signs.

When it comes to financial exploitation of the elderly, you may observe signs such as:

Signs of neglect in adults over the age of 60 can include things like:

Emotional abuse can be one of the most challenging types of mistreatment to detect. However, it often occurs alongside other forms of abuse that are easier to spot. Signs of emotional neglect in adults aged 60 or above may include:

When it comes to physical abuse, the signs can sometimes be mistaken for the results of accidents or unintentional injuries. That's why it's important to look for patterns, unusual behaviors, or injuries that are unlikely to be the result of accidents. You may see signs like:

Sexual abuse in adults is a type of mistreatment that can remain hidden for a long time, often because of embarrassment, fear of further humiliation, or memory problems caused by dementia. Plus, the most tell-tale signs are usually out of view unless you're a trusted caregiver, medical professional, or intimate partner. Indications of sexual abuse may include:

It's also important to know what to look for in the behavior of potential abusers. People who abuse or neglect seniors may:

Who Are the Most Common Abusers?

Chances are good that you already know someone who has the motive and opportunity to mistreat or take advantage of a vulnerable senior. Abuse can be inflicted by almost anybody who benefits from having power, authority, or an expectation of trust. For example, potential elder abusers can include:

In most cases of elder abuse, the victims know the perpetrators very well. That's even true when it comes to financial abuse. In fact, according to the NCEA, family members account for close to 60 percent of those who financially exploit seniors. And friends, neighbors, and home care aides collectively account for nearly 32 percent of financial abusers who target the elderly. Financial abusers are often motivated by a sense of entitlement, the opportunity for a sizeable inheritance, a lack of money caused by unemployment, or the need to pay off debts or fuel an addiction to drugs, shopping, or gambling.

Many elderly people experience domestic violence. Couples who retire together often deal with new financial challenges, disabilities, or changes to their roles that strain their relationships. Physical or emotional abuse can become a problem as tensions escalate and frustration sets in. Adult children who live with their elderly parents can also become violent and frustrated when faced with the costs and demands of caregiving, especially if they depend on their parents' financial resources. In some cases, the elder abuse is merely a continuation of past domestic violence.

Some residents of long-term care facilities experience violent assaults or verbal aggression by other residents. Whether or not resident-on-resident violence should be considered elder abuse is still open for debate among many researchers. Such violence is often caused by dementia or other types of mental illness or cognitive decline.

Why Are Some Seniors More Vulnerable to Abuse Than Others?

Most of us like to imagine growing old peacefully, with few worries and lots of freedom to enjoy our most cherished personal interests. But the reality is that, for many of us, our senior years will be different than what we envisioned. We may face new challenges that we didn't expect. And we may increasingly need to rely on the help of other people. As a result, we may become targets for abuse, neglect, or exploitation. Here are some of the risk factors:

Remember: Nobody who is abused or neglected is ever to blame. No matter how vulnerable you may be due to your circumstances, you never deserve to be mistreated. If you're a victim, it's not your fault. There is never a good excuse for anyone to abuse or neglect someone else.

What Should I Do If I See, Suspect, or Experience Elder Mistreatment?

Trust what you're seeing or feeling. Elder abuse can sometimes be subjective, but it's usually better to err on the side of caution. That's even true for potential elderly neglect by family members. Your emotions may be conflicted, but choose to do what's necessary in order to protect yourself or the senior in your life who you suspect is being mistreated. Don't stay silent.

If there is an immediate danger to life, limb, or property, call 911 right away.

Otherwise, call Adult Protective Services (APS) in your state. APS exists to protect vulnerable seniors and investigate reports of alleged abuse or neglect. The APS agency in your region may have its own elder abuse hotline, allowing you to maintain confidentiality while reporting mistreatment. In many states, APS workers will:

When it comes to nursing home abuse, reporting can also be done through your state's Long-Term Care Ombudsman Program (LTCOP). Residents of nursing homes, assisted living communities, and other long-term care facilities can contact their region's LTCOP to make complaints and get independent advocates working on their behalf. The LTCOP in your region may even operate a confidential nursing home abuse hotline.

It's also a good idea to know your state's laws as they pertain to elder abuse. Explore the resources in your state so that you can learn your rights and know where to turn for help.

How Can Elder Abuse Be Prevented?

Increased awareness of this problem is essential. So don't be afraid to share what you know. Reach out to other seniors or younger adults. Even many politicians and professionals in the fields of healthcare, criminal justice, and financial services need reminders about the problem of elder abuse and neglect. They also need to be encouraged to report it when they suspect it.

Some of the ways to lower your risk of being abused or neglected as a senior include:

When all is said and done, you may not be able to fully prevent mistreatment. But seniors who stay active and involved in their communities often make poor targets for abusers. Help look after other people so that they'll help look after you.