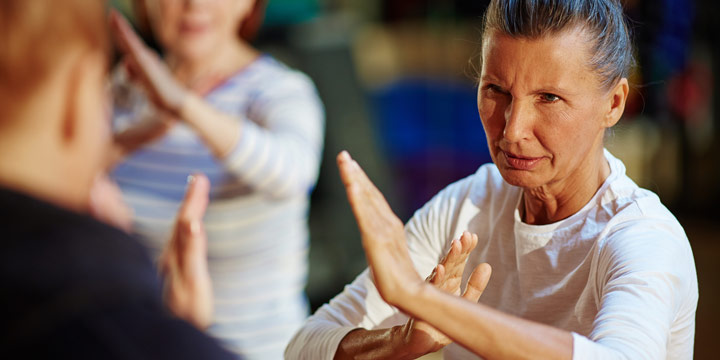 Self-Defense for Seniors: Must-Know Info About How to Protect Yourself

Everyone deserves to feel secure. That's why self-defense for seniors is such an important topic. As people age, their bodies tend to get slower and weaker, which can make them vulnerable to attacks by criminals. Fortunately, there are a variety of good tactics that older adults can learn in order to protect themselves.

The sad reality is that some people do prey on seniors. A U.S. Department of Justice report noted that between 2003 and 2013, 93 percent of all crimes against people over age 65 were property crimes such as burglary and theft. And even though seniors and the elderly experience lower rates of violent crime than those in other age groups, the report showed that over the same time period, the rate of violent crime against people over 65 increased by 27 percent.

This article will help you understand different types of self-defense training that are available (including martial arts and cane self-defense) and how such training can benefit your health and well-being. You'll learn about steps you can take to avoid becoming a target and discover basic techniques for defending yourself if you do end up in a dangerous situation. You'll also read about important factors to consider before turning to a firearm for your defense. 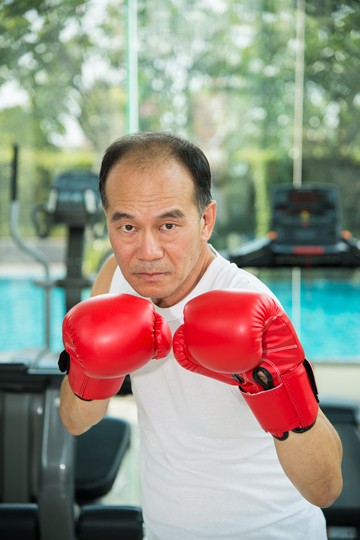 Age and physical limitations do not have to prevent you from learning how to protect yourself. Whether you study basic self-defense techniques or pursue advanced martial arts training, knowing that you're capable of defending yourself can be a great confidence booster. And when you feel (and look) confident, you show the world that you are not weak or vulnerable. That can potentially deter would-be aggressors and keep you from having to defend yourself at all.

Self-defense training teaches you how to stay aware of your surroundings and focus on your safety. You will learn to recognize where potential attackers could be lurking and where you could go to escape. You will also learn how to prepare for the unexpected and how to quickly disable an assailant if necessary. With practice, you can develop the reactions that are required to protect yourself in an emergency.

Such training also brings a host of physical benefits: You can improve your balance, coordination, stamina, strength, and flexibility. Even if you never have to use the techniques you learn in class, the exercise you get through self-defense training can have a positive impact on your overall health.

Safety Tips: How to Avoid Being Targeted

Prevention should always be your primary objective. After all, the best way to stay safe is to not get into dicey situations in the first place.

Did you know that your body language and mannerisms can give off signals that make you more likely to be a target for criminals? In one famous study, researchers recorded more than 60 people walking along a busy New York City street. Then, they showed the video to a group of prison inmates who had been convicted of assaulting strangers. The prisoners were asked to identify the people on the video who would make the most desirable targets.

The inmates were remarkably consistent in their choices. It turned out that age, size, and gender were not the deciding factors. Instead, the criminals selected victims who dragged their feet and moved awkwardly, who were slumped over, and who kept their eyes on the ground. Those people were perceived as being easy to overpower.

If you can exhibit confidence and self-assurance, a potential attacker may decide you're not the easy mark he or she was hoping for. To avoid appearing vulnerable, try following these tips:

Basic Techniques to Fend Off an Attack

Even if you do your best to prevent becoming a target of crime, you still might end up in a dangerous situation. So it's important to know how to stay safe and defend yourself.

Always remember that self-preservation is the ultimate goal. So if a thief demands your money or personal property, especially if he or she is wielding a weapon, give it to him or her. Nothing in your pockets or purse is worth more than your life. If you have no easy way to escape, it's far better to just give the mugger what he or she wants so that he or she will leave you alone. If you're able to do so, keep a safe distance from the thief by tossing your valuables in his or her direction rather than handing them over at close range.

Sometimes, however, a physical confrontation is unavoidable. You typically have just a few seconds to make a move, so you need to be prepared. These tips can help you better protect yourself if you end up in such a situation:

Martial Arts for Seniors of All Ability Levels

Studying martial arts regularly can be an empowering way for seniors to learn how to defend themselves. It can also help boost their stamina, coordination, range of motion, and mental acuity. In addition, students learn respect and self-discipline. This type of training allows people of all ages and ability levels to realize their maximum potential.

There are hundreds of martial arts, which means it can be difficult to choose the most appropriate one. The best martial art for seniors is the one that aligns with their capabilities. So before beginning any training regimen, be sure to assess your physical abilities. You don't want to overdo things and injure yourself. It's important to begin slowly, then gradually build up your skill level. (If you have some sort of physical limitation, talk to the instructor. He or she should be able to adapt the exercises and techniques to suit your needs.)

It's often said that tai chi is the best martial art for beginners because it involves slow, gentle movements with low impact. Most tai chi for seniors classes focus on health and meditation as opposed to self-defense, but they can show you how to move your body and can act as a good bridge to other disciplines.

Here are a few types of defensive martial arts that may be good options for seniors:

Why not transform a common mobility aid into an effective tool for self-defense? A discipline known as "cane fu" teaches seniors to fight back against attackers using an ordinary walking stick. Defense experts point out that unlike weapons such as pepper spray or stun guns, a cane can be taken anywhere and is always ready for action. Often perceived as a symbol of weakness, a cane can instead be an excellent way to inflict pain and neutralize aggressors.

Some techniques include swinging the cane in circles, hooking an assailant's neck or foot, and striking the knee, nose, or throat. The video below, from Cane Masters International founder Mark Shuey, illustrates some basic methods of self-defense using a cane:

And this video, also from Mark Shuey, demonstrates cane self-defense techniques that can be used by an individual in a wheelchair:

If you're choosing a cane with an eye on self-defense, it's important to get the right kind. Any high-quality walking stick will work, but some are better designed for defending yourself from attackers. For instance, a cane with a wide crook will allow you to hook or trap an assailant. Wooden canes are heavier than metal or fibreglass ones, which means they have more impact on an attacker; however, they also require more strength to wield. You'll want to make sure you choose a cane that you can handle comfortably.

Some canes are optimized for defensive use and are sometimes known as combat canes. Legal in all states (so long as they don't conceal another weapon such as a blade or firearm), such canes cost more than simple walking sticks but offer greater potential as self-defense tools. For example, a cane with a series of notches along the length of the shaft will concentrate the force of a strike on the raised area of each notch and cause considerably more pain when you strike an attacker.

Cane-fighting classes are becoming increasingly available through senior centers, retirement communities, and police departments. Some are offered free of charge. Ask around to see what the options are in your community.

Taking a formal self-defense class offers plenty of advantages. For one thing, being part of a group can help you stay motivated. It's also easier to practice your techniques on real live people. Plus, you can get help from the instructor or your fellow students if you find that you're having difficulty.

Locate classes by contacting your local senior center, YMCA, public library, or police department. Fullpower International also offers workshops on self-defense for the elderly throughout a handful of states.

In addition, check out martial arts schools in your area. Most offer self-defense classes (especially for women), and a growing number of them are gearing such classes toward the specific needs of seniors.

When considering any class, be sure to get answers to the following questions:

What to Consider Before Getting a Gun

For some older adults, having a gun for self-protection can alleviate anxiety and make them feel like they are in a better position to defend themselves against an aggressor. In fact, statistics show that one-third of American adults over the age of 50 own a gun. That's a higher percentage than any other age group.

However, many self-defense experts advise against carrying a gun, as it can easily be used against you in an attack. Also, many seniors have issues like poor eyesight or weak fine motor skills that can make it difficult to operate a gun safely.

If you're thinking about getting a firearm, here are some important factors to consider:

Be Confident in Your Abilities

Self-defense for seniors can take many forms. Whether you choose to take up martial arts, learn cane fu, or take a basic self-defense class, you'll be better prepared to protect yourself from attacks and escape from aggressors.