2,000 Americans Admit to the Modern Slang They Use and Understand

Not traditional definitions, of course. We're referring to the modern interpretation of today's generational jargon.

We polled 2,000 Americans to see just how well they understand these words, how regularly they use them, and what the potential gaps are between generations, genders, and even sexual orientations. Curious to see how well baby boomers understand "Bye Felicia"? Read on to see what we discovered. 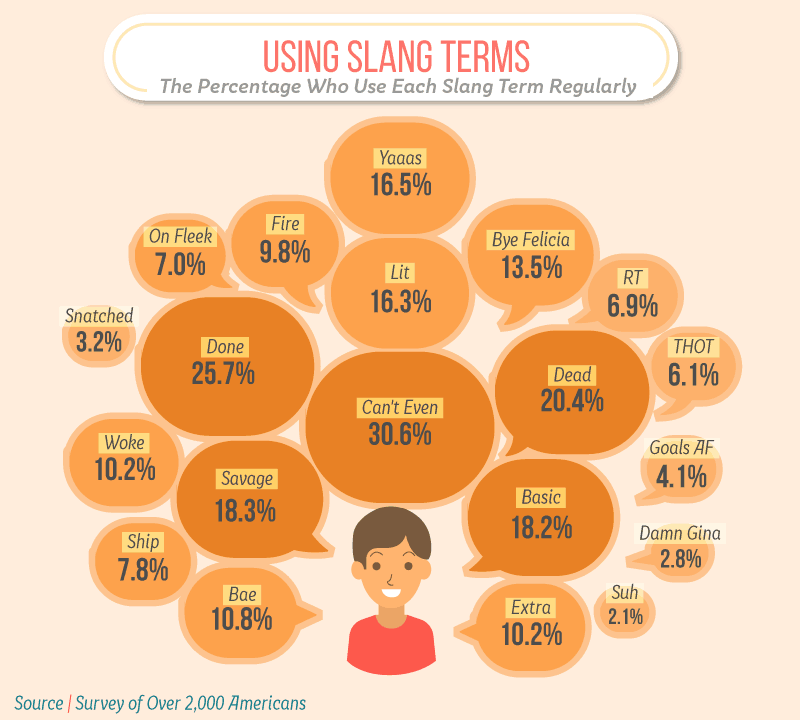 What slang terms do participants use most regularly? It turns out, nearly 31 percent use "can't even" more than any other slang term. As one of the most well-known memes on the Internet today, "can't even" goes as far back as 2005, according to Know Your Meme, and was even used by country music singer Kacey Musgraves as she accepted an award at the 2014 Grammy Awards. If you've been on the Internet over the last decade, you've probably come in contact with someone who just "can't even." (Try using this slang the next time you discover an amazing 55+ community or get some terrific news about your physical health.)

Almost 26 percent of respondents also use "done" on a regular basis. According to Refinery29, "done" is a way to admit being exasperated by something, and is one of the most used jargons by the 2,000 people surveyed. Over 20 percent of participants use "dead," while more than 16 percent use "savage," "basic," "yaaas," and "lit" regularly. 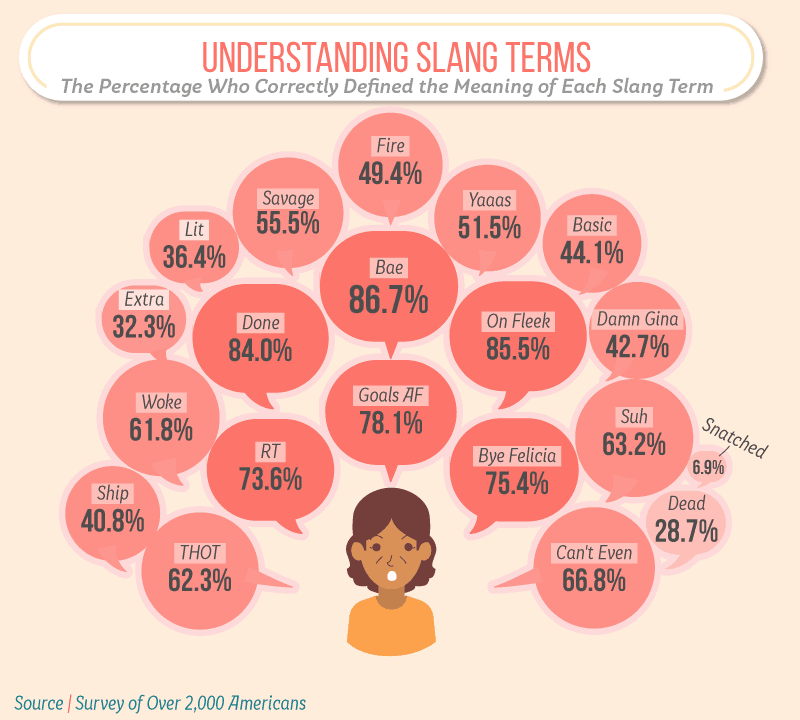 The most widely (and accurately) recognized jargon is "bae" (nearly 87 percent). Considering the slang word means "before anyone else," this piece of jargon has risen above generational slang and is widely recognized by almost everyone surveyed.

Like "bae," "on fleek" was correctly recognized by almost 86 percent of respondents, and "done" by 84 percent of participants. "On fleek" allegedly originated in 2014 from Vine to describe well-manicured eyebrows, but today, it remains a widely recognized colloquialism. (You might even hear it being used in some of the nation's most stylish and comfortable assisted living communities.)

The least recognized pieces of jargon are "snatched" (identified correctly by less than 7 percent), "dead" (about 29 percent), and "extra" (around 32 percent).

When it came to identifying the correct translation of some of today's most common jargon, we found that many of these words were likely to be misinterpreted by at least one-third of the participants surveyed.

Nearly half incorrectly guessed the meaning behind "yaaas." While it may resemble the word "yes" (as 43 percent suggested), it actually refers to a way to express excitement over something. (For instance, imagine being pleasantly surprised by the delicious food being served in some of the nation's best nursing homes.)

While many failed to define "yaaas," more correctly defined "extra." "More of something" may be a traditional explanation, but in these modern times, it means something is over the top. Of the 2,000 people surveyed, only 32 percent were able to make that connection.

More easily recognized vernacular included "Thot" (where 63 percent correctly identified it as "that hoe over there") and "Bye Felicia" (75 percent knew it meant dismissing someone unimportant). "Bye Felicia" may be one of the oldest pieces of jargon on our list. Coined in the '90s film "Friday" by actor and rapper Ice Cube, "Bye Felicia" has had one of the most impressive 20-year comebacks (even working its way into the 2015 film "Straight Outta Compton").

We learned that baby boomers are the least likely of any generation to recognize the meanings of the most commonly used slang terms today.

Only 8 percent were able to identify "lit" as something that was awesome or cool and were more likely to associate it with someone being drunk, stoned, or high. They fared slightly better (17 percent) on gauging that "extra" meant over the top and that "yaaas" was a way to express excitement (35 percent).

However, 43 percent of baby boomers knew that "THOT" meant "that hoe over there" and more than half knew that "Bye Felicia" was a dismissal to someone unimportant. 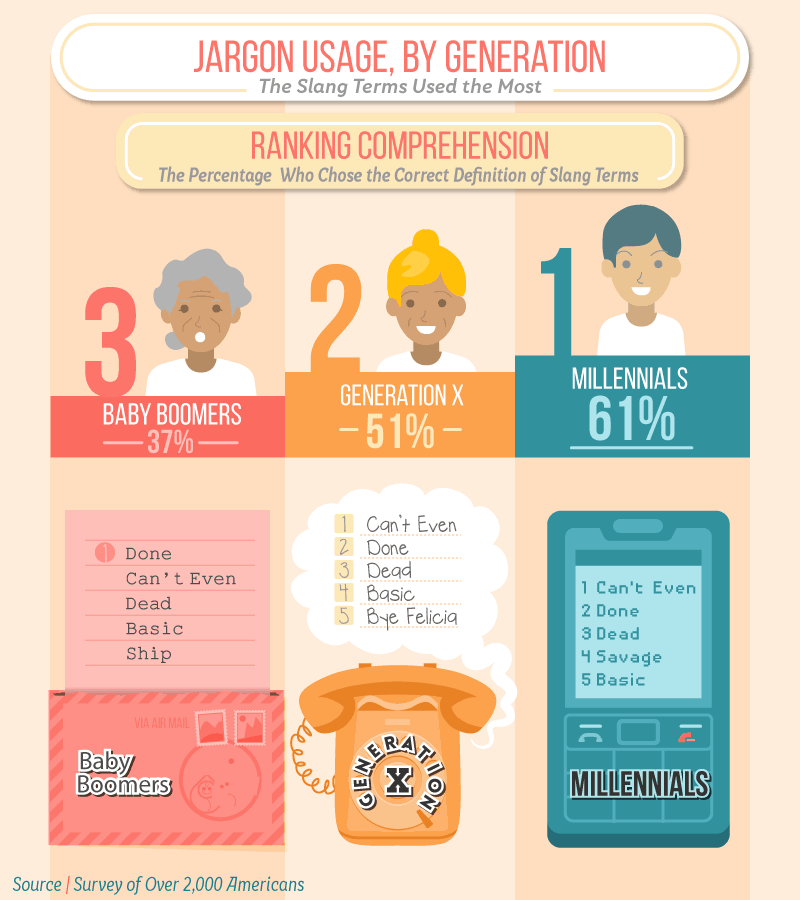 Millennials — who correctly recognized over 60 percent of the words surveyed — were almost identically aligned with Gen Xers. Despite a potential 30-year gap, both generations told us that "can't even," "done," "dead," and "basic" are among their most commonly used shorthand vocabulary. Gen Xers still say "Bye Felicia," while millennials are into "savage" (a way to describe someone as a "badass").

While baby boomers may be less likely to understand some of today's jargon, we found they commonly use many of the same terms as millennials and Gen Xers. They understood 37 percent of the words surveyed and told us they use "done," "can't even," "dead," and "basic" just like everyone else. 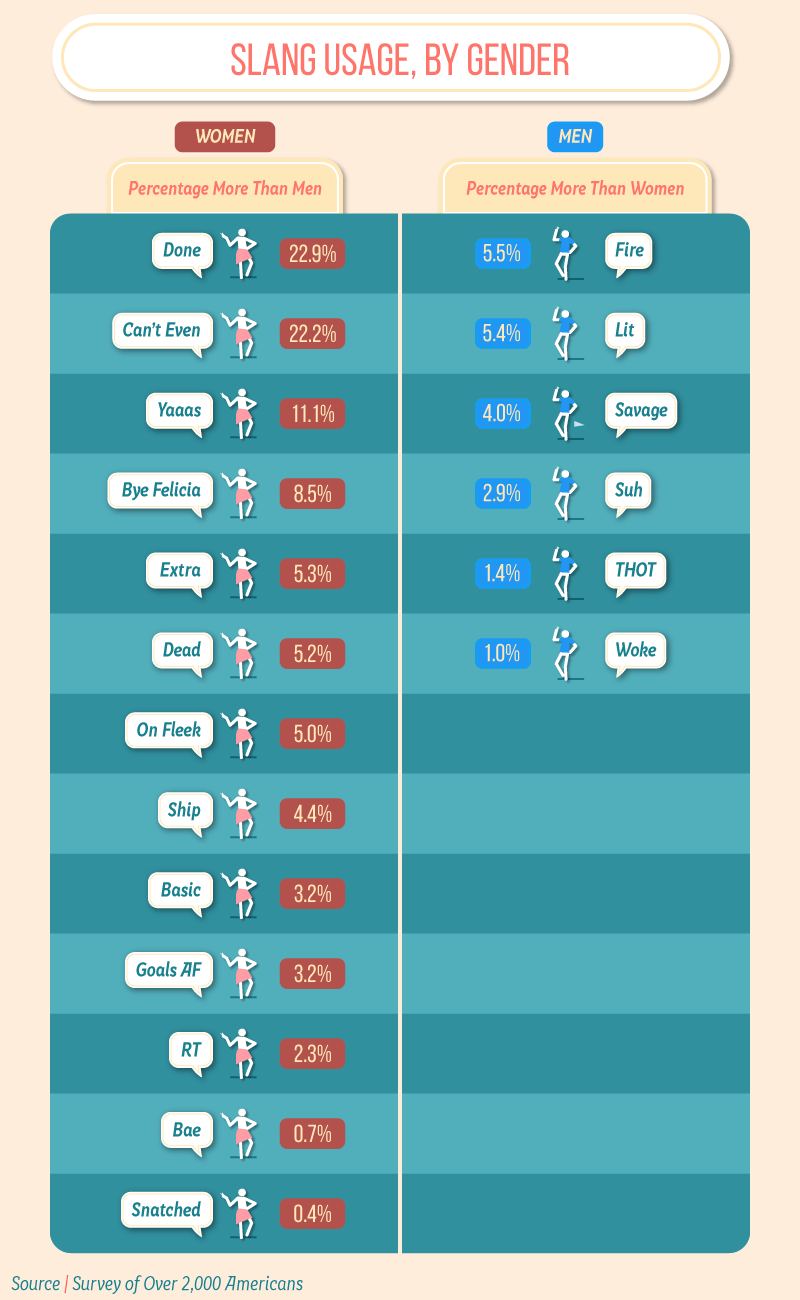 Men were more likely than women to use words like "savage," "fire," "woke," and "THOT" in their everyday language.

Women, however, were likely to use more jargon than men. Most notably, women use "can't even" over 20 percent more than men. They also used "yaaas," "done," and "Bye Felicia" far more than men did.

Bonding Over How We "Can't Even" 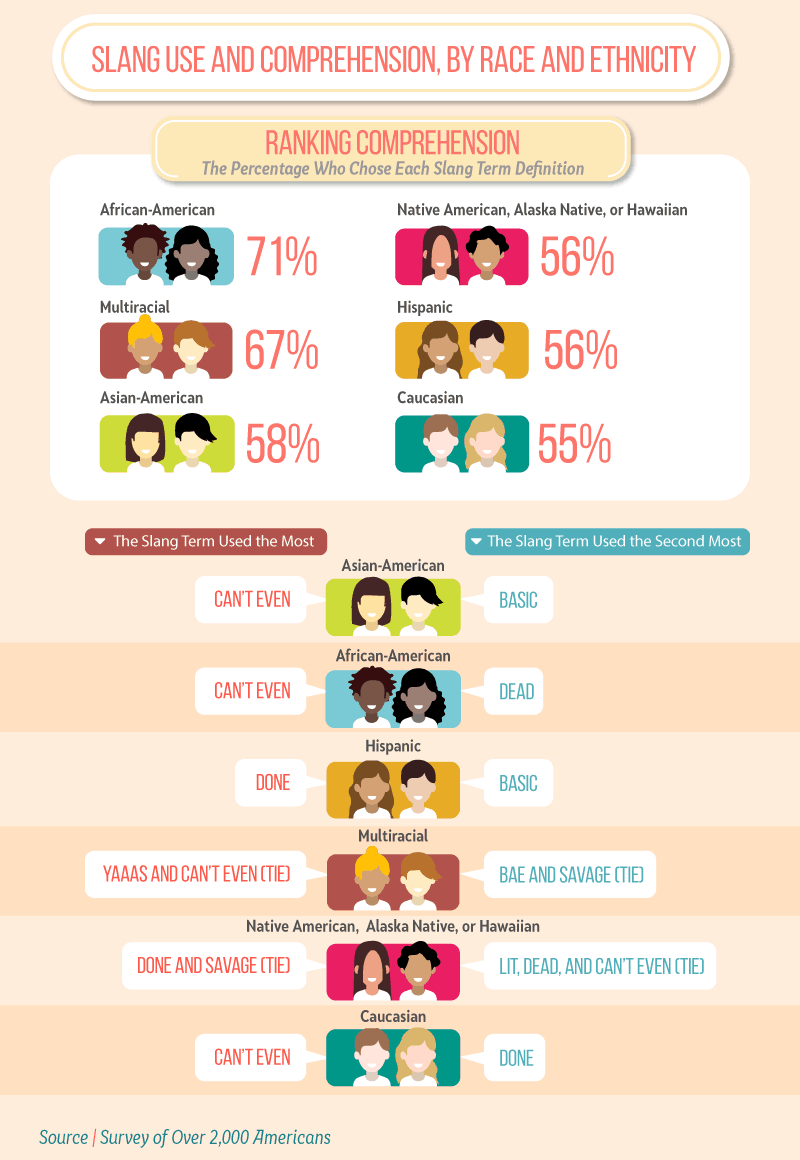 When it came to their most commonly used slang terms, "can't even" was a go-to for Asian-Americans, black or African-Americans, white or Caucasians, and those who identified as multiracial. "Yaaas" was a tie for multiracial respondents, and Native Americans, Alaska Natives, and Hawaiians were most likely to use "done" and "savage" as part of their casual lingo.

"Can't even" wasn't completely alone, as our research showed that "basic" and "dead" were the second most commonly used phrases among most ethnicities. 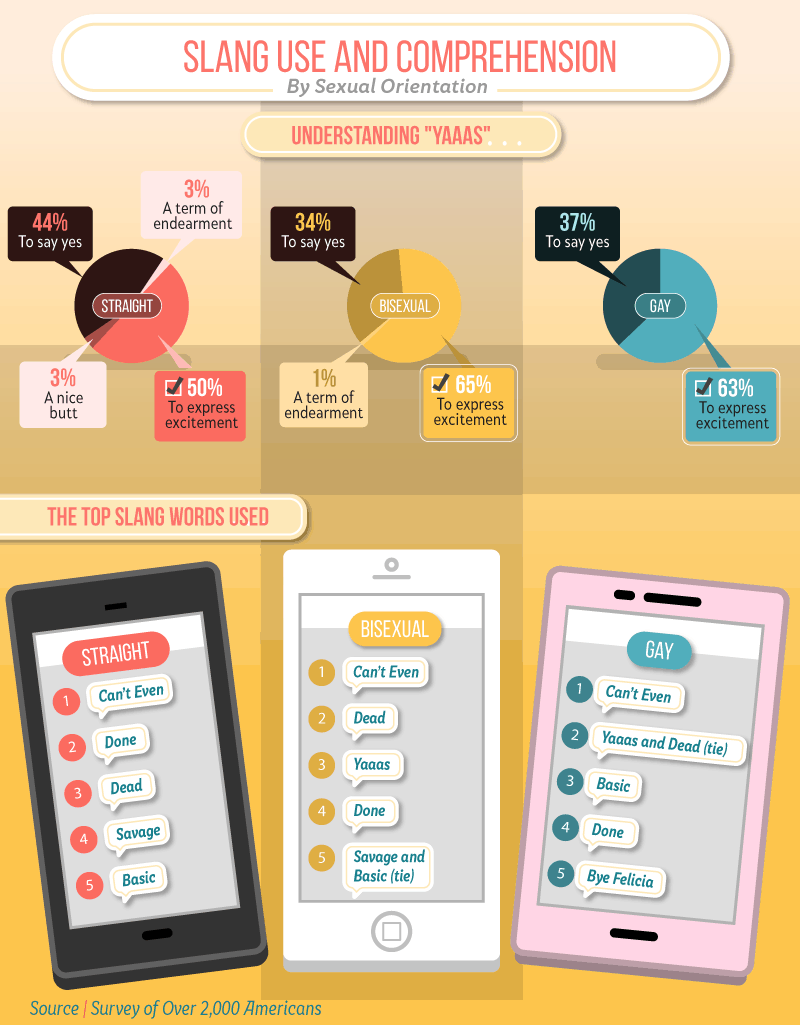 Regardless of their sexual orientation, "can't even" was still the most popular slang term among straight, gay, and bisexual participants. Like race and ethnicity, while they may have differences regarding sexual preference, those polled bonded over their affection for expressing how much they just "can't even."

"Bye Felicia" was most popular among those who identified as gay, as well as "yaaas" and "basic." "Savage" was more common among straight and bisexual respondents.

When it came to their understanding of "yaaas," we found that those who were bisexual and gay were more likely than straight participants to recognize its meaning — as a way to express excitement rather than to say "yes" or to refer to someone who had a good butt.

Our study found that millennials were more likely than any other generation to use and understand the slang of the day, but Gen Xers weren't too far behind. Even baby boomers were well-versed in phrases like "THOT." Like all jargon, some words are hot for a bit and then fade over time. Essentially, just about everyone is still keen on how much we all "can't even."

We surveyed 2,000 Americans on the meaning of different slang terms, as well as their regular use of slang terms.

You don't have to guess how to properly share our content for noncommercial use only. Just link your readers back to this page in your coverage.